1. Opening for Steve-O (above)

Technically this was in 2016 (December), but the Year of Weird Gigs really got kicked off the day after my birthday when I opened for Jackass star Steve-O at YAAM! in Berlin. I was barely coherent, nursing quite the sizeable hangover, and Steve-O didn’t show up until a minute before I went onstage. Afterwards I discovered that a) he’s gone so totally sober , b) he’s a vegan, and c) this didn’t stop him from hanging out with a buxom, blonde German “Instagram model” before and after the show. To be fair, he puts on a great show — celebrity stories + painful live stunts — and he takes a photo with every fan after the show who wants one. I just wish I remembered the rest.

2. Vienna Orphan Boy Who brings a ten-year-old kid to a late-night comedy show and then LEAVES HIM ALONE in the first row? Especially during the headline set of someone notorious for interacting with the crowd (ahem, yours truly). That’s right: Austrian hippie parents. Watch the rest here:

3. Story Party Köln Performing for an audience of 99% women in an air-raid shelter SOUNDS interesting, and it is! Rachman Blake puts on a very fun night of dating horror stories, and for my set I presented my own horror story: the state of my hairline, about which I polled the ladies present for advice. “Shave it?” “YES!!!” Grrr.

4. Protest Comedy with Donatella Strumpf Look, we were all in a weird state the week Donald Trump was inaugurated, and I was no different. I was going through a breakup, I’d just moved to a new place (in Berlin-Friedrichshain — ugh!), and then “Bread Loaf Hair” took over and everyone lost their mind. My response was to go to Adorable Creatures dressed in drag and do a bad D.T. impersonation whilst recycling old terrible one-liners. Sample joke: “I use toothpaste as a lubricant during tantric sex… because I’m trying to achieve Enlighten-peppermint.” Boom, krang, cue Bannon on the rimshot.

​​Donatella Strumpf was just the beginning of a year of character experiments gone awry. The peak was Insel Mann (Island Man), the product of too much time alone with my notebook on summer vacation. Insel Mann is a super hero who — for some unexplained reason — only protects islands; no continents, subcontinents, peninsulas, capes, or landbridges receive his services. He presents himself over a backdrop of island music courtesy his monkey DJ, Chubby, before taking an audience volunteer through a series of “island fighting techniques” and treating everyone to a round of tasty pineapple. “I have no idea where this is going,” said one guy in the front row. Neither did I.

BONUS: Getting High with the FFFPÖ No, not the right-wing Austrian political party the FPÖ, silly, the Film- und Fernsehpodcast Österreich. Austrian comedy provacateur Paul Seiringer runs an English-language podcast where guests get high and watch a terrible Austrian film or TV series with Paul, then review it afterwards. My assignment was Blutgletscher (Blood Glacier), a weirdly Pro-Life zombie movie set in the Austrian Alps which no amount of smoking anything could make even remotely not nonsense. See the trailer: 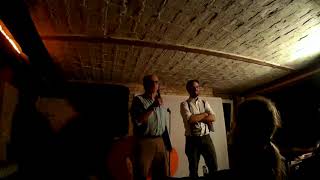